This technique gives an intermittent tone, some people describe the sound that this makes as a sighing sound. The idea being to move the bow in a circular motion across the string, as shown in the diagram below. This means that as the bow passes in a vertical motion to the string then a clear tone is produced, when the bow is on a horizontal motion to the string then a scratchy ‘non’ tone is produced. The frequency of the intermittent tone can be increased and decreased depending on the size and speed of the circle.
I found when I started playing this technique it to be quite tricky as you are doing something quite unnatural with you R.H. I found that the best way was to make sure that you have a firm bow hold as when you are making the ‘scratch’ noise you have to push the bow away from you and the towards you  and you want to be in full control of the bow. You want to start off thinking that you are making a square and gradually smooth out the corners until you have created a circle. 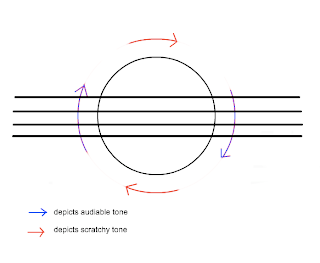 This technique can be used on all strings and, as with a lot of these techniques, they can be used in conjunction with others for example bowing behind the bridge or, as in Cadenzas and Variations, I & II br Richard Wernick (1995) he calls for the violinist to “make circular motion (with wood of bow) from bridge to nut to bridge on open D and A strings; allow only sufficient weight of bow to produce upper partials .“ There are many different ways to notate this technique but they all seem to have a circle above the note being played as in the examples below.
Posted by Alex Targowski at 07:34